She married into the prestigious Herbert family, receiving the title of Countess of Pembroke in July 1936 upon her marriage to Sidney Charles Herbert, 16th Earl of Pembroke.

Mary and Sidney resided at Wilton House in Wiltshire,  the country seat for the Earls of Pembroke since the 1540s. Wilton House is one of England’s most celebrated stately homes, and during their time there, the Pembrokes were renowned for hosting wild fancy-dress parties attended by members of England’s aristocratic and glamorous ‘Bright Young Things’. Visitors to Wilton House and friends of the Earl and Countess included Stephen Tennant, William Walton, Zita Jungman and Rex Whistler.

A close friend of Mary’s husband, Cecil Beaton first visited Wilton House in 1927 and found it ‘unfailing in its beauty.’ He continued to regularly frequent the country estate and documented the exploits of the Earl and Countess among other members of their upper class circle.

This photograph of the Countess was taken by Beaton around the time leading up to her marriage. She is seated in front of a brightly lit and glistening backdrop — typical of Beaton’s style. The Countess poses with her head turned to the side, revealing the delicate features of her side profile; while the light falls across her face, highlighting her porcelain skin. Her raven hair is cropped short with sculpted waves and she wears layers of elegant chiffon draped across her body. 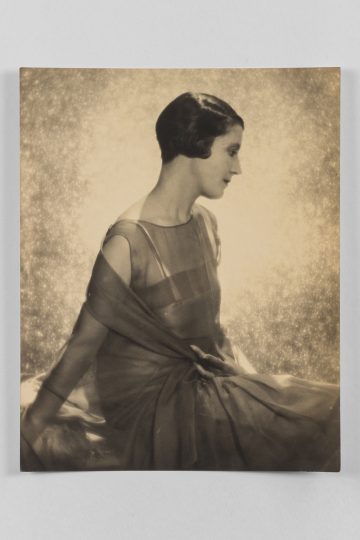