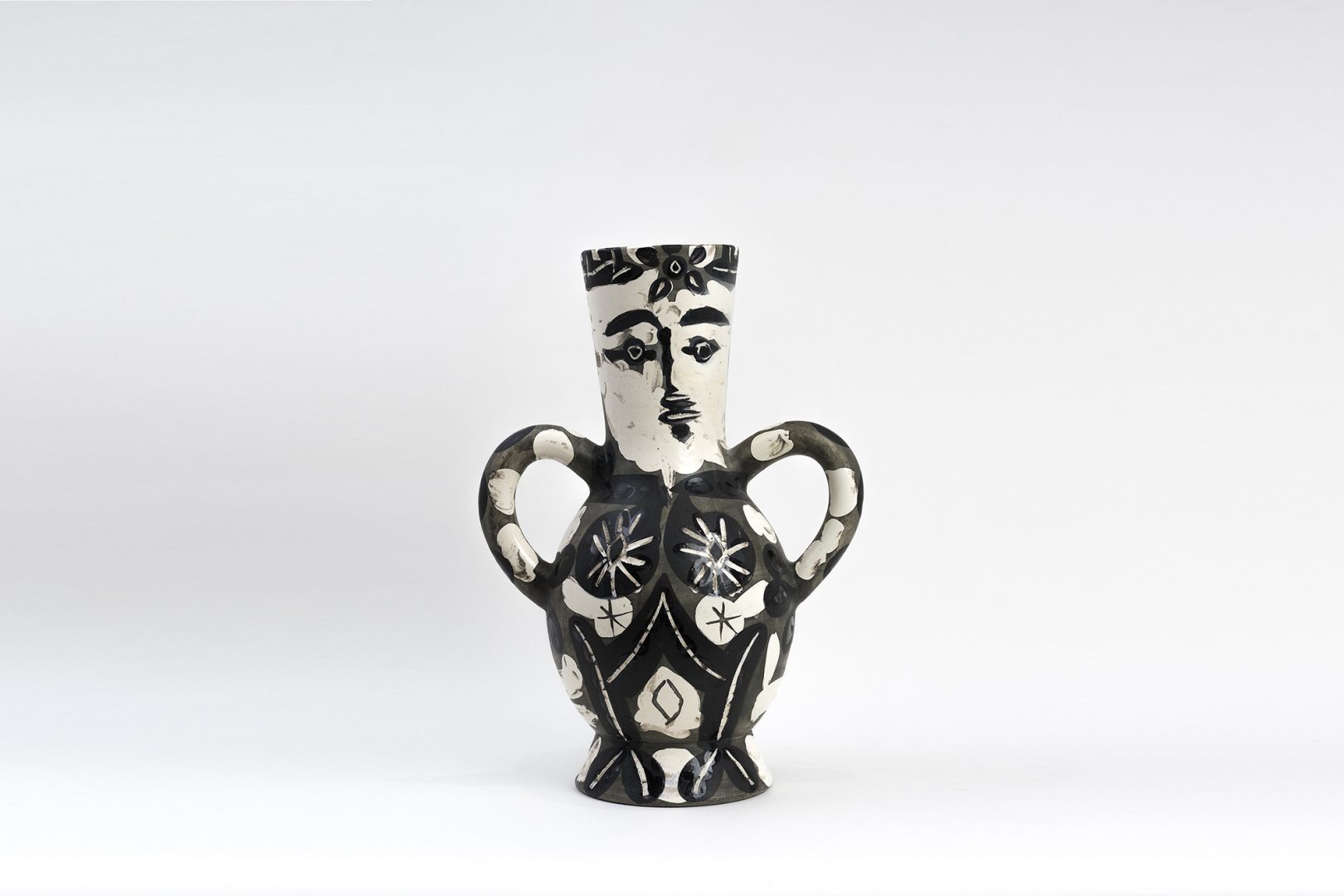 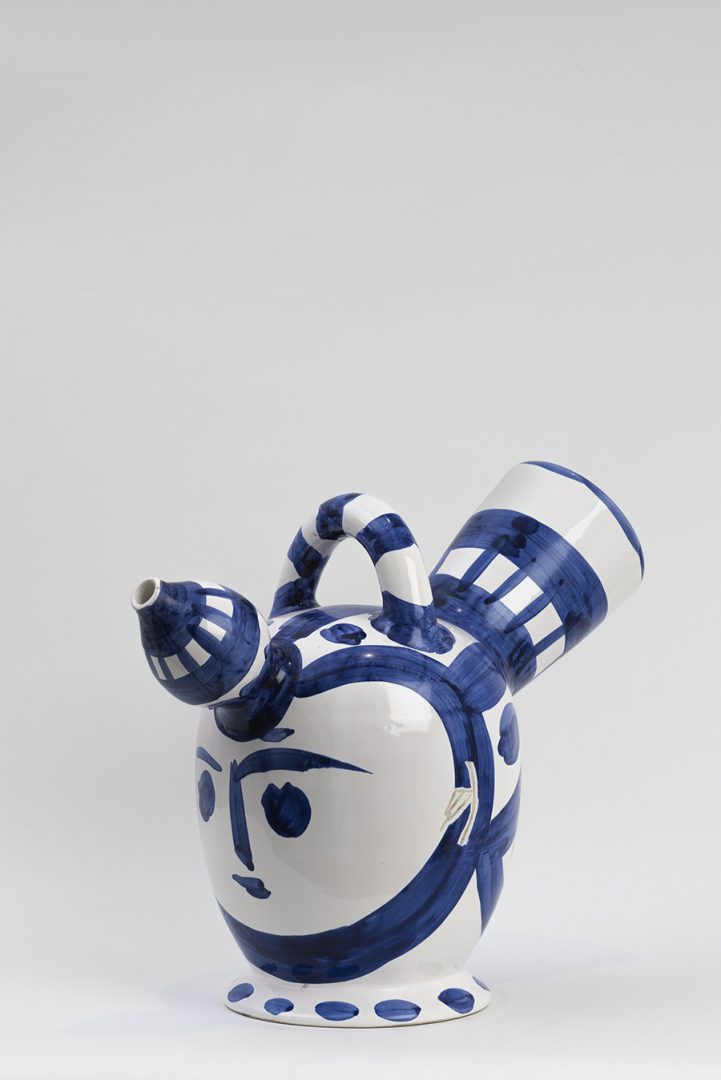 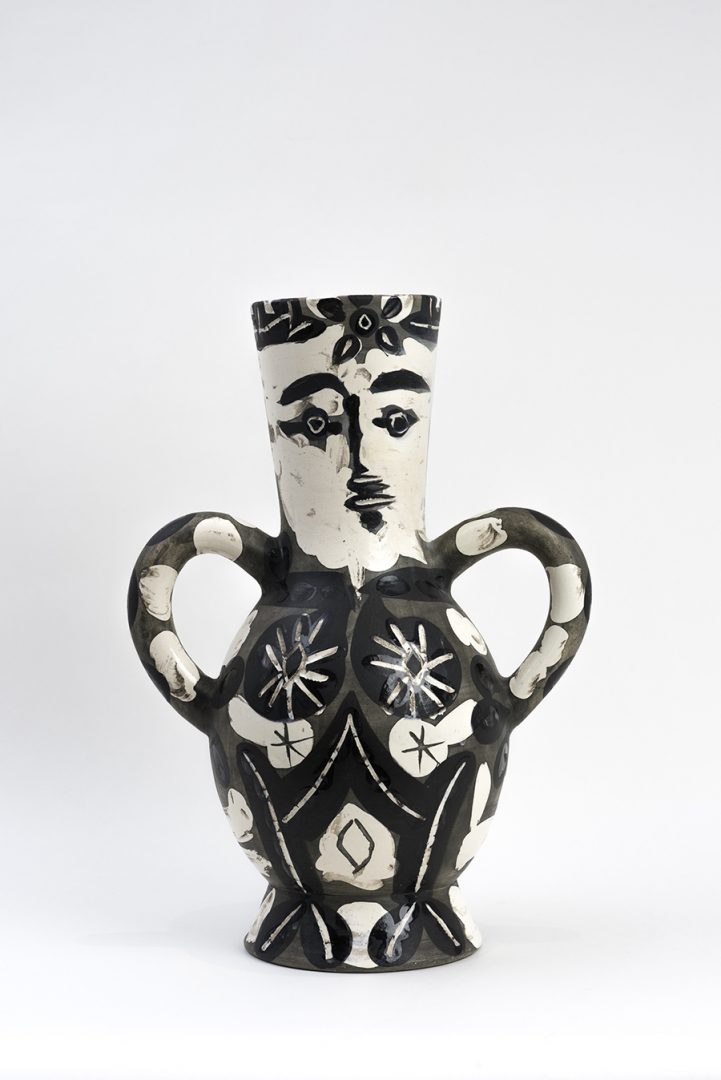 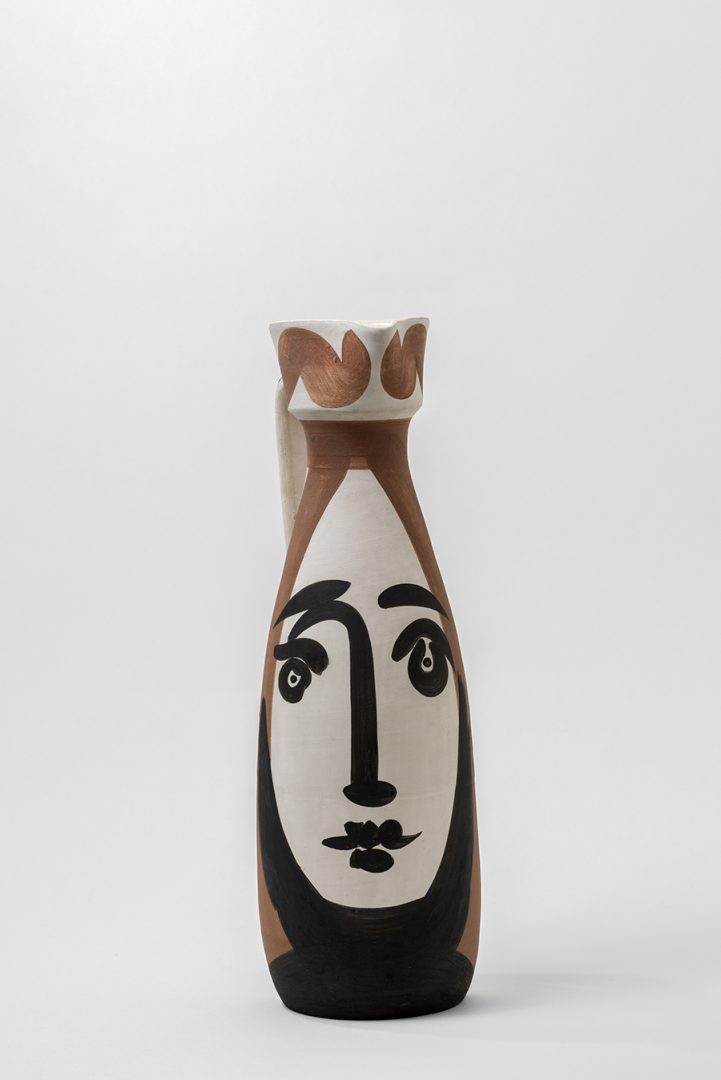 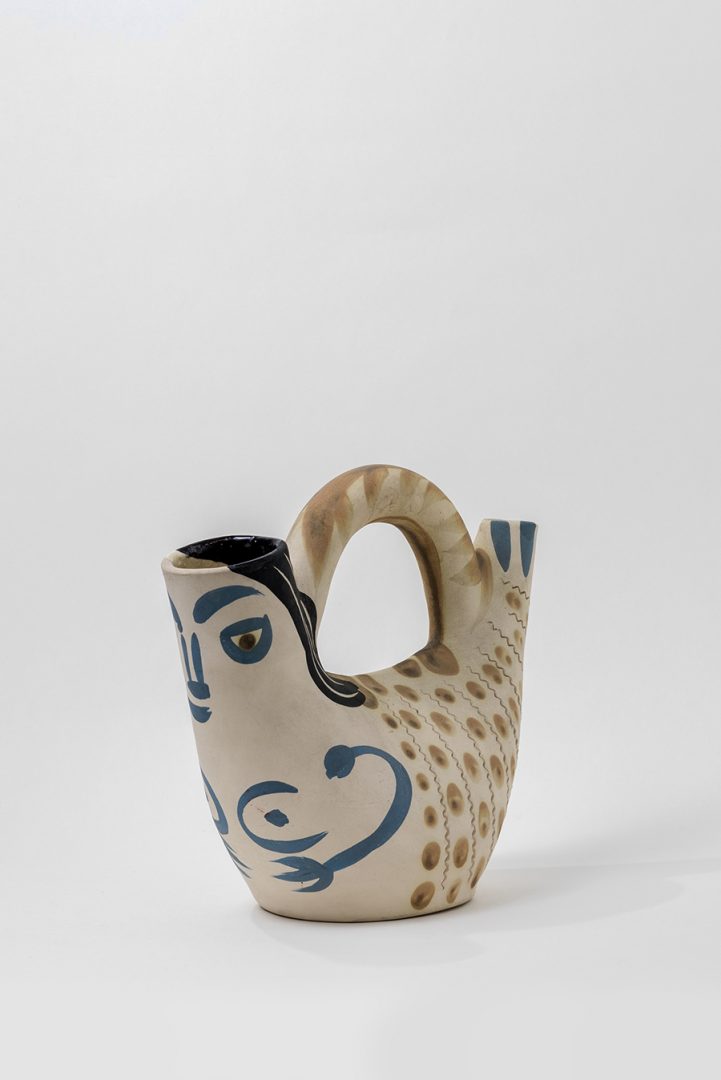 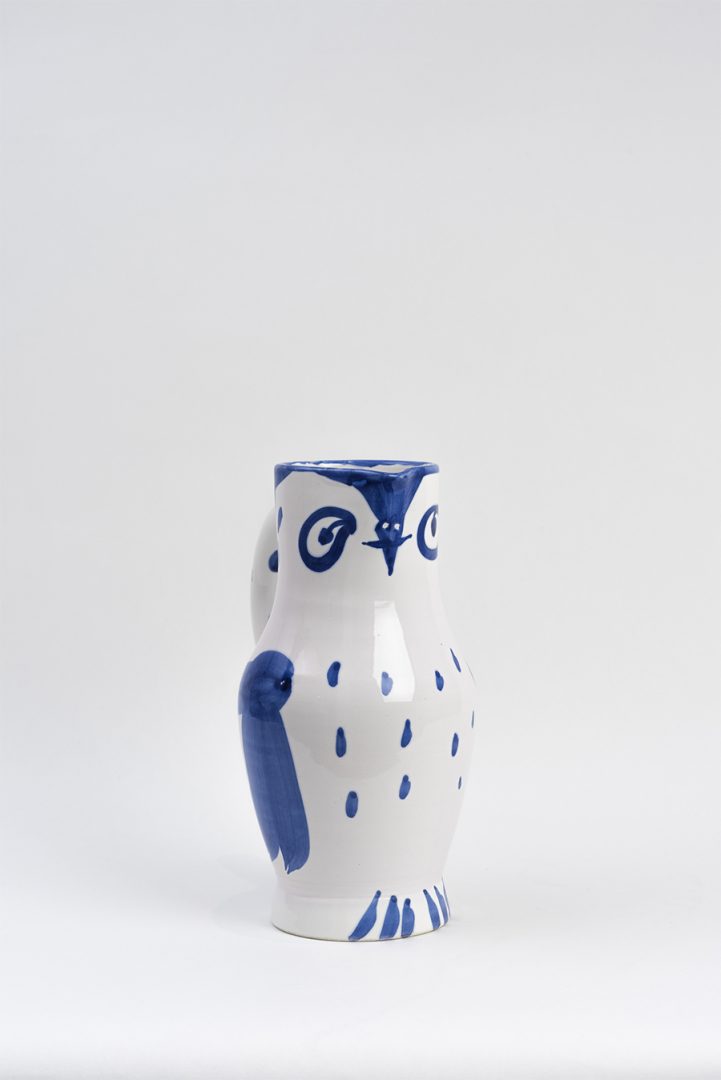 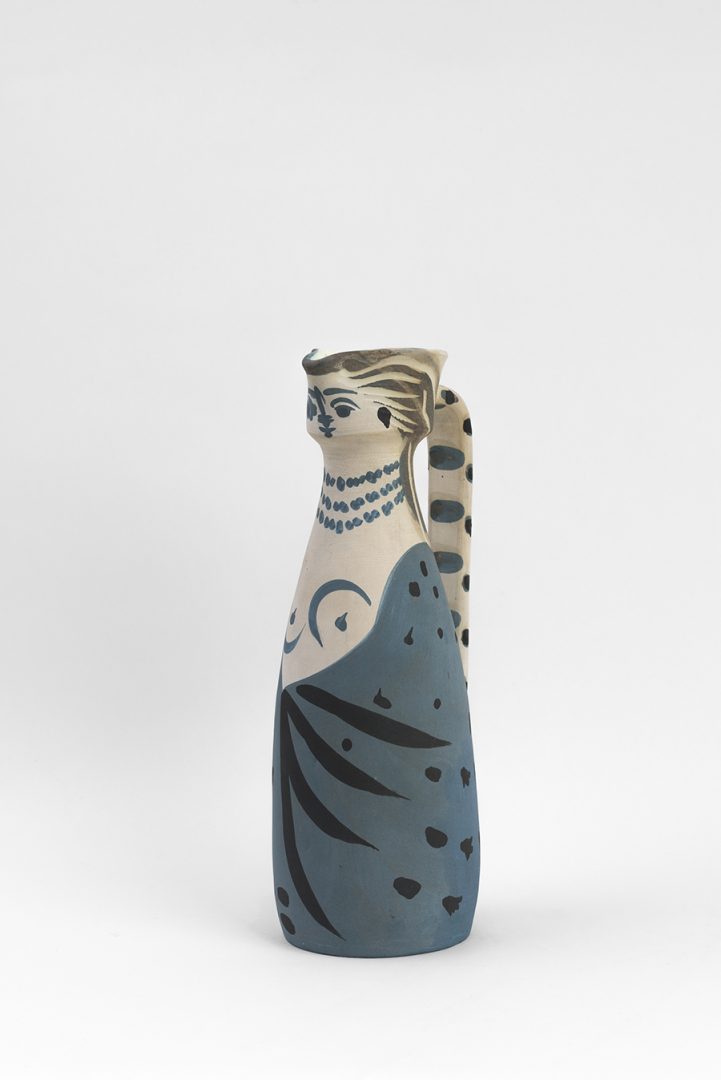 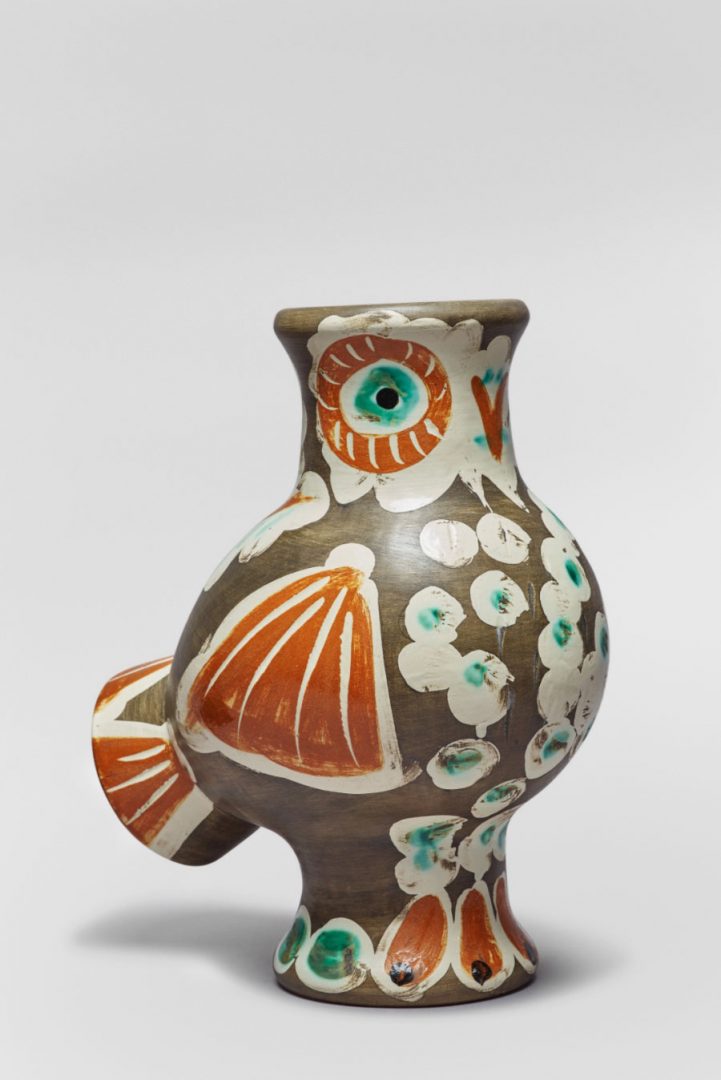 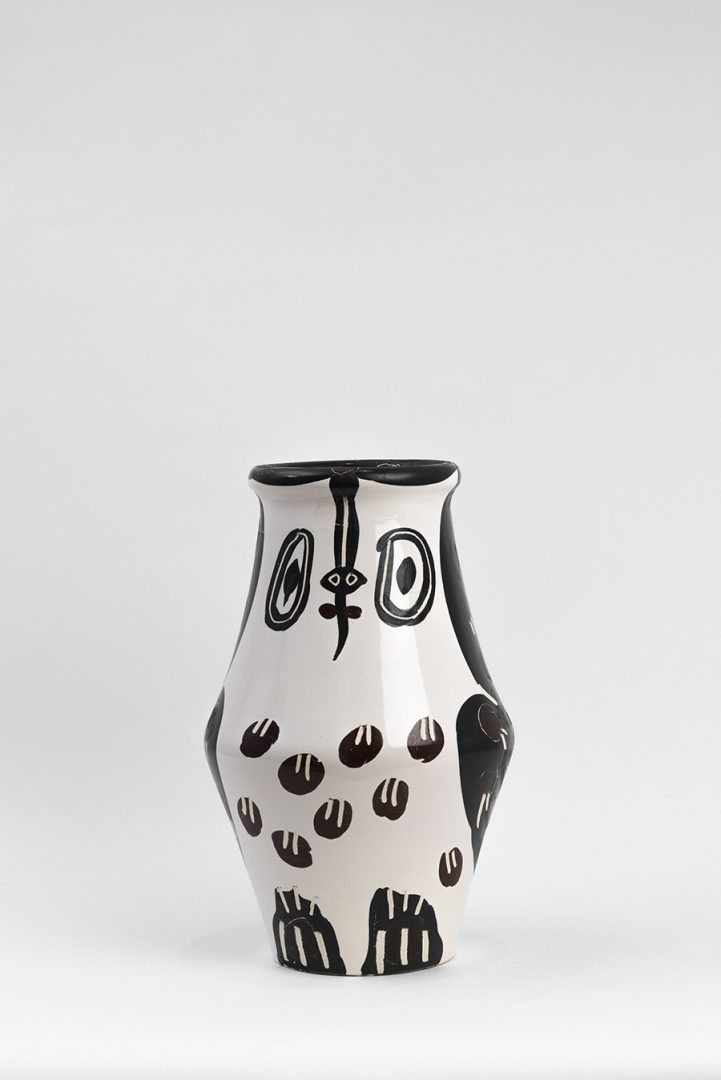 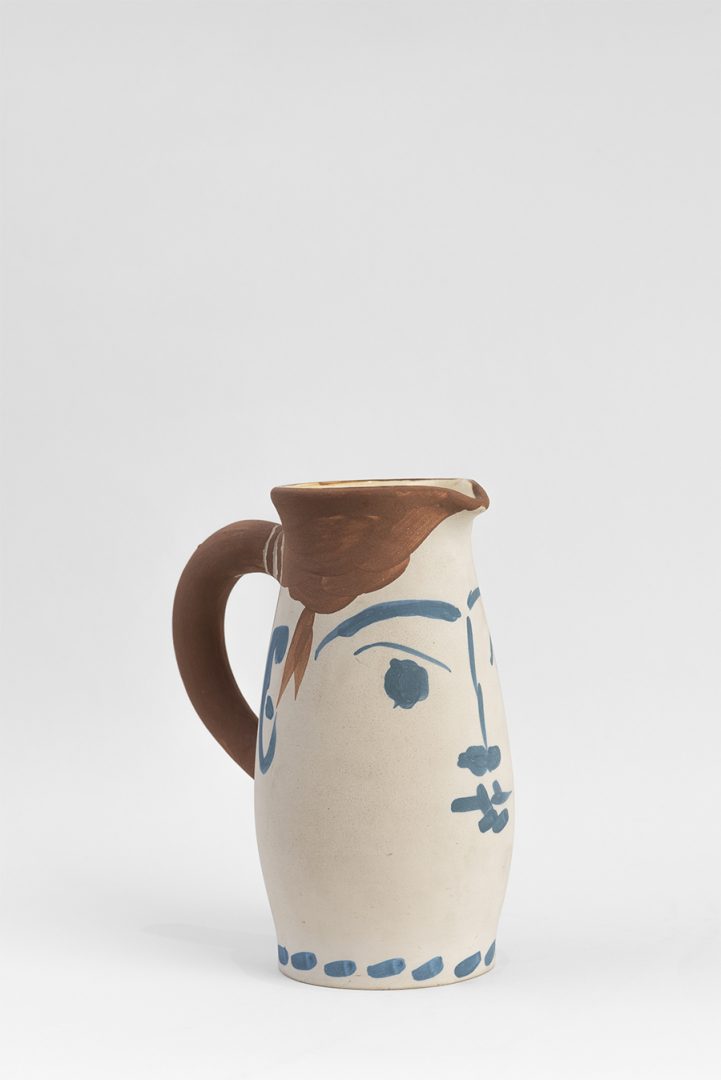 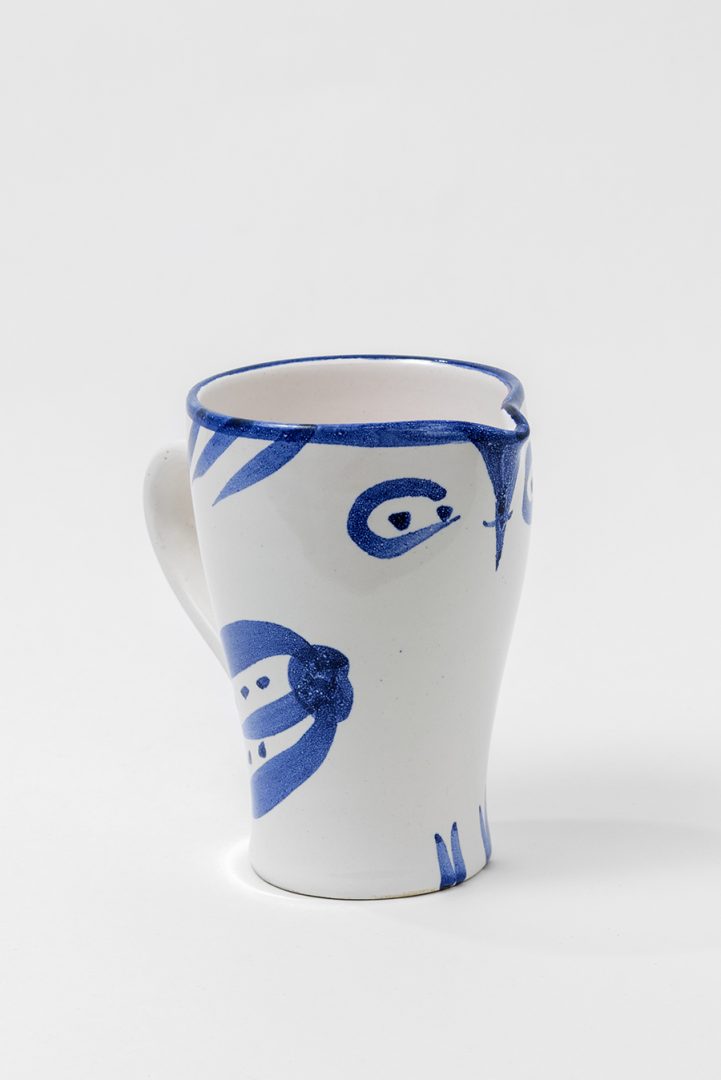 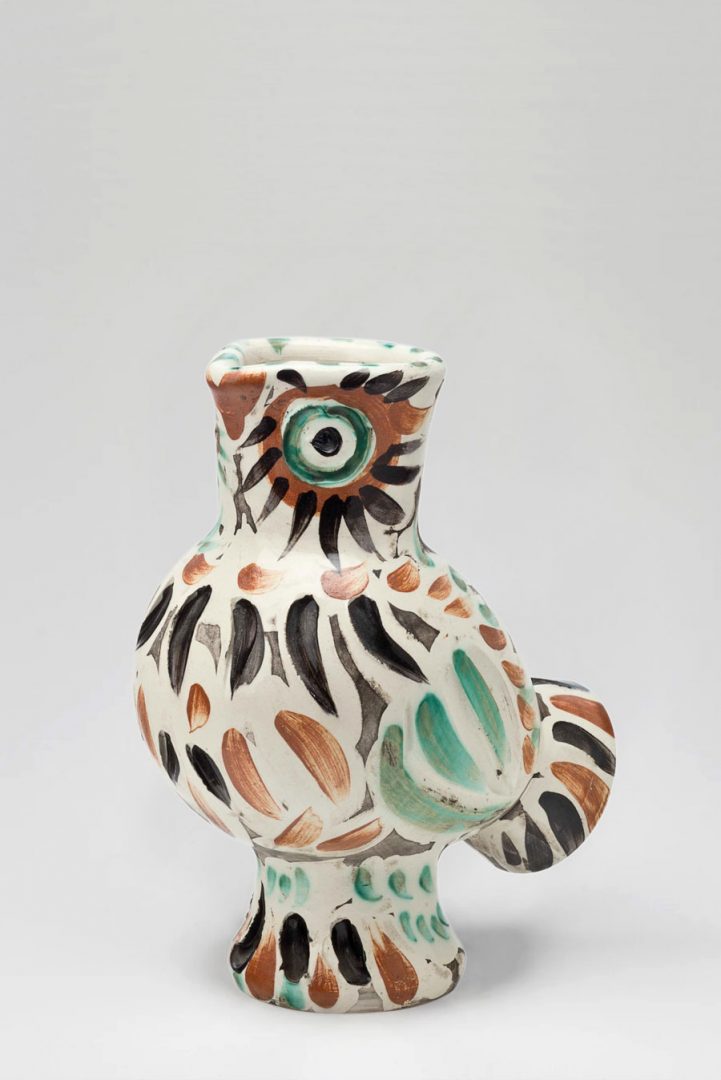 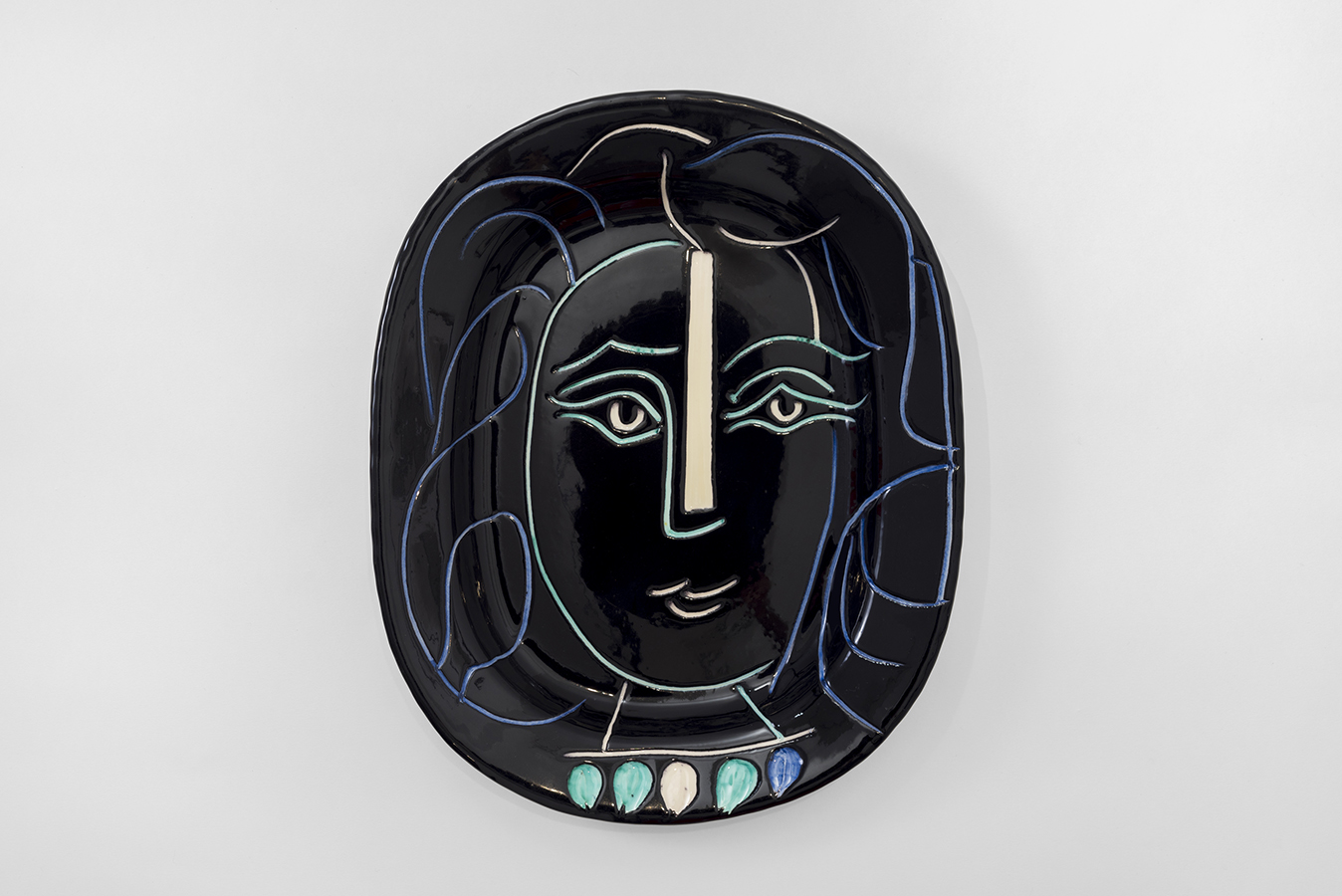 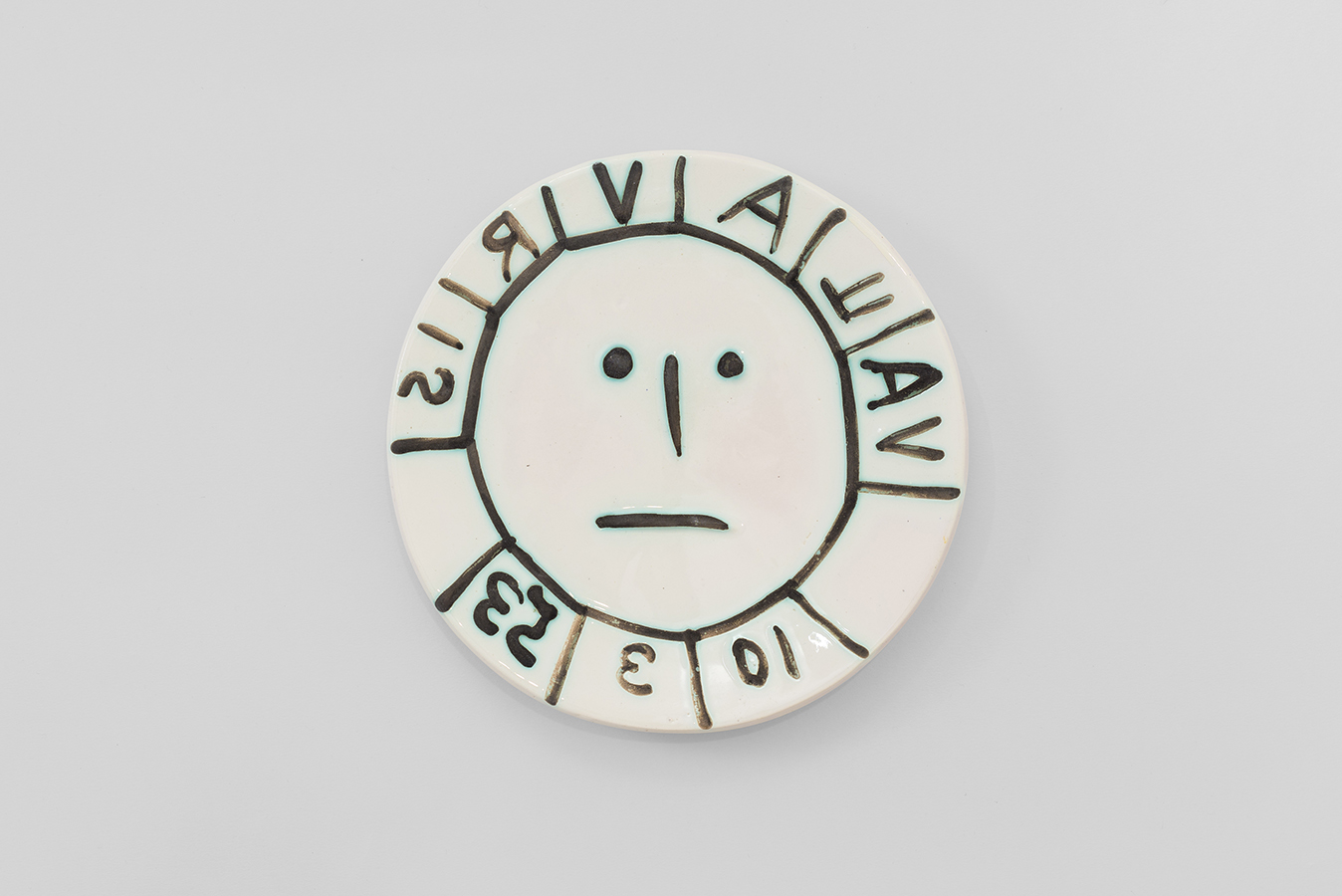 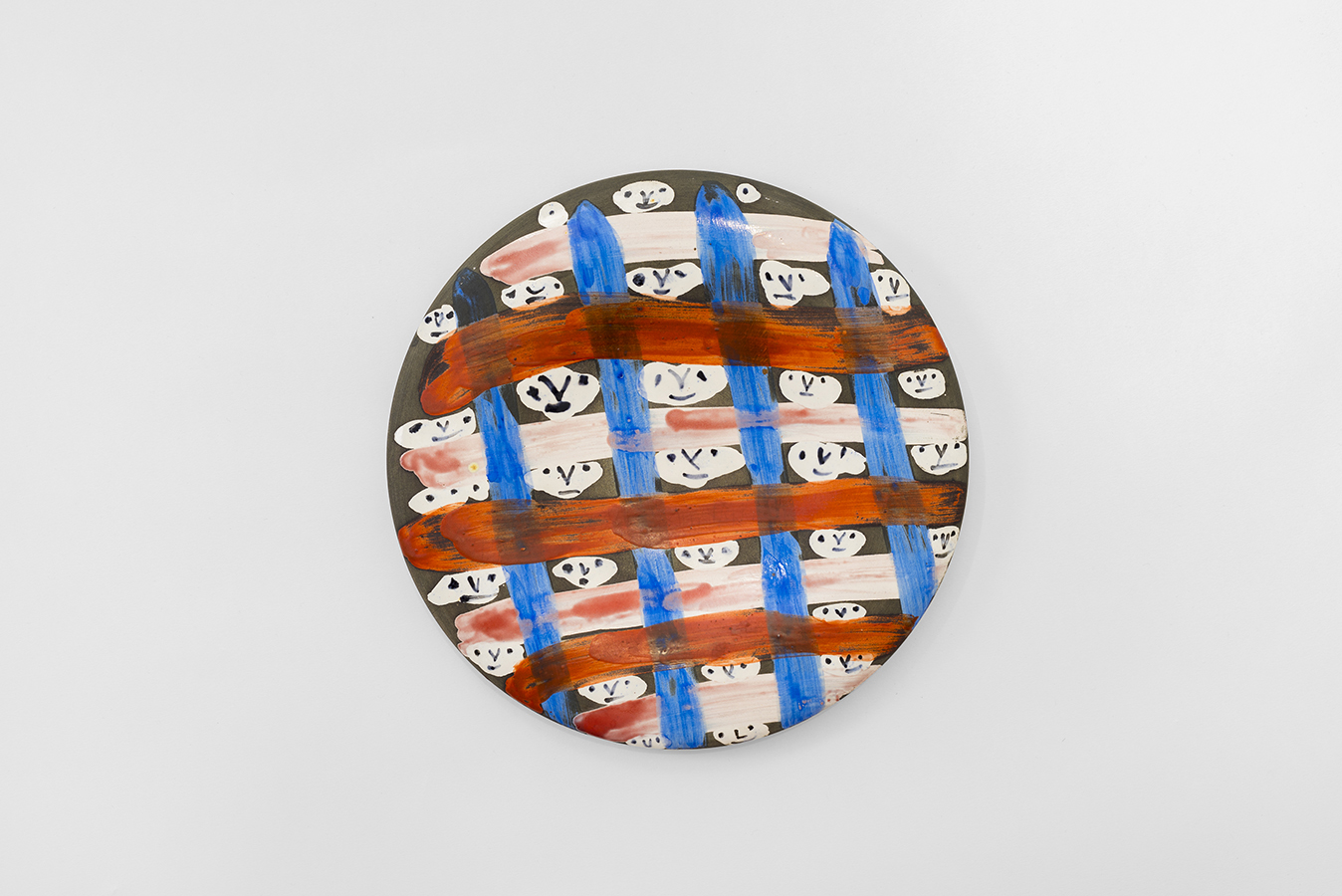 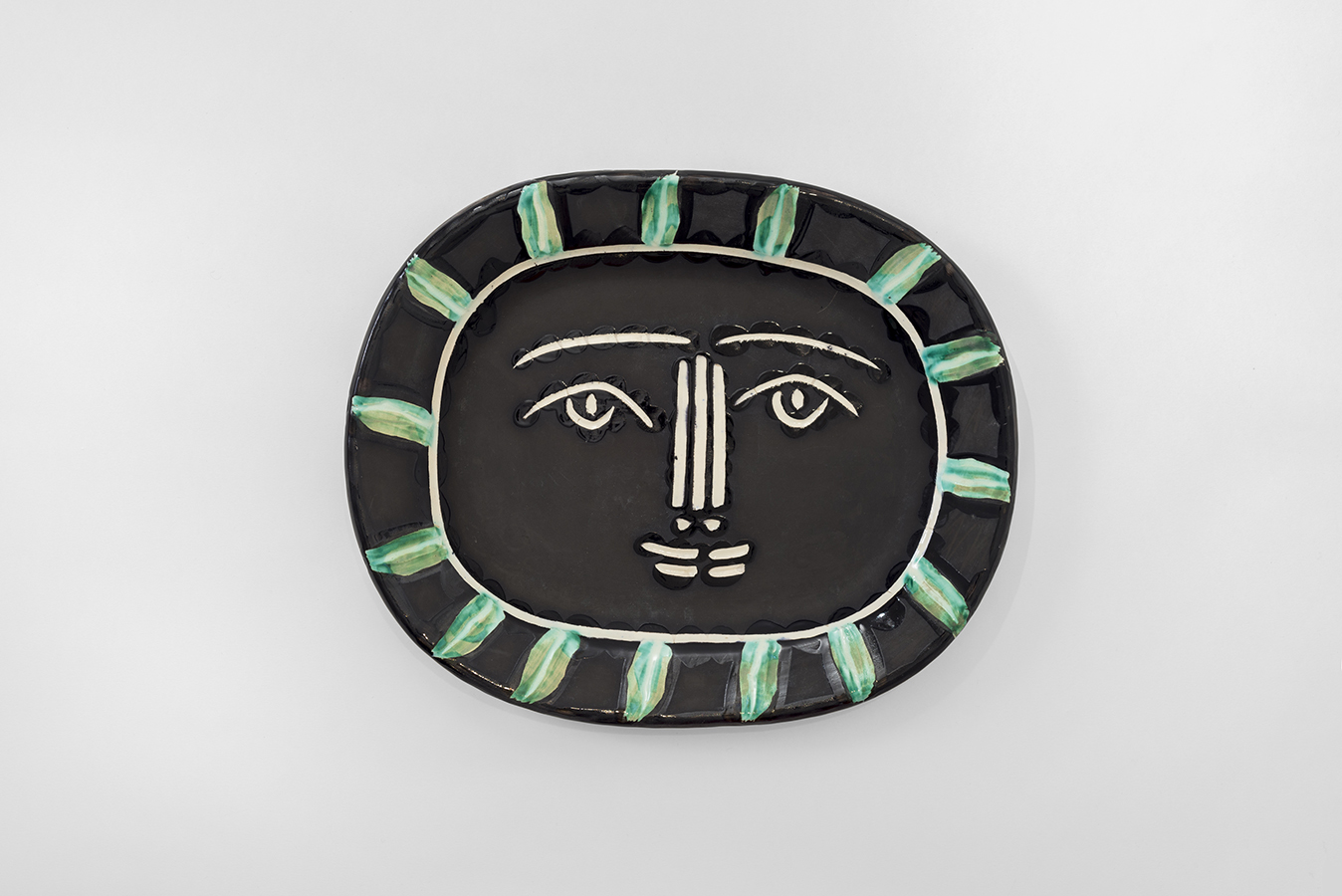 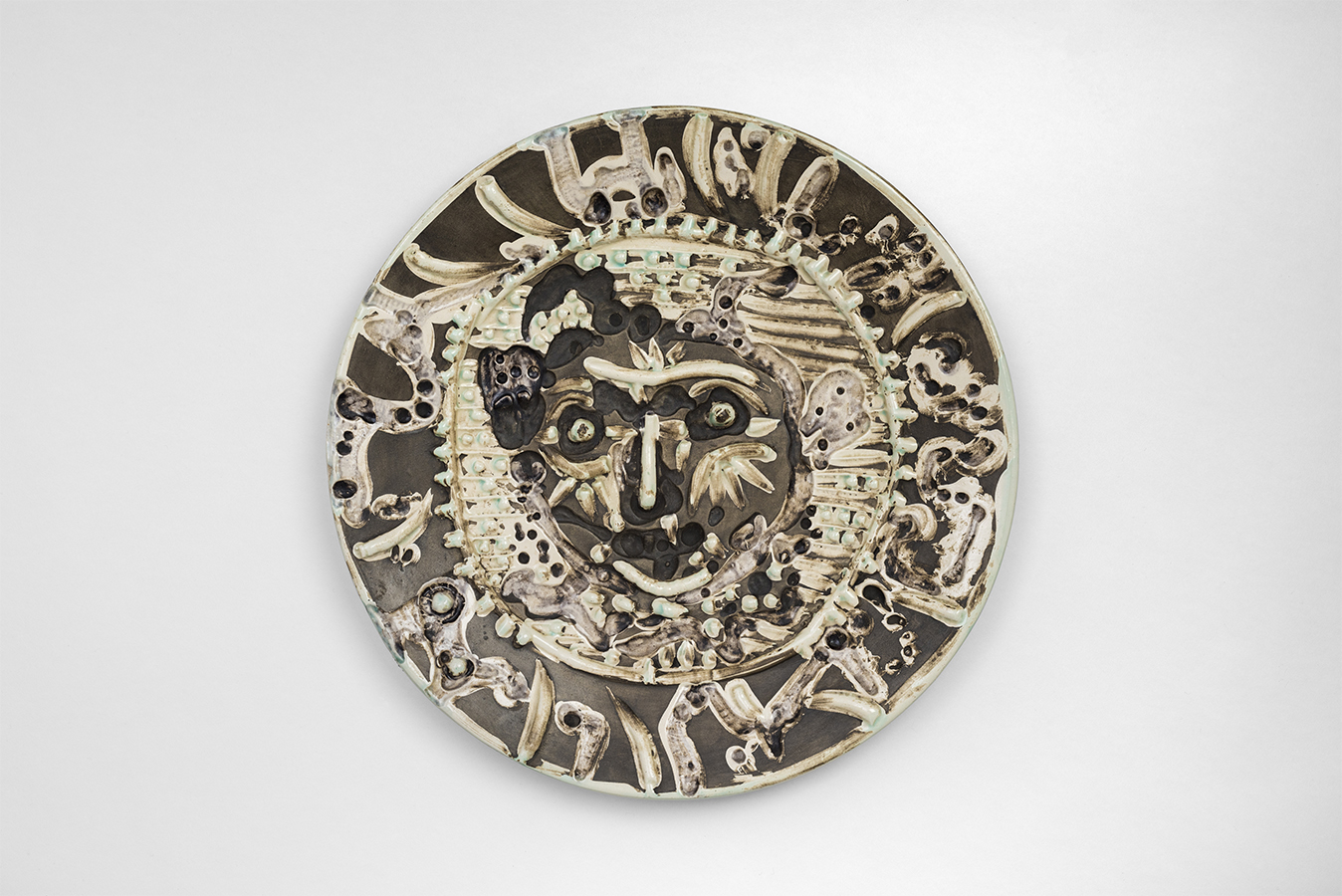 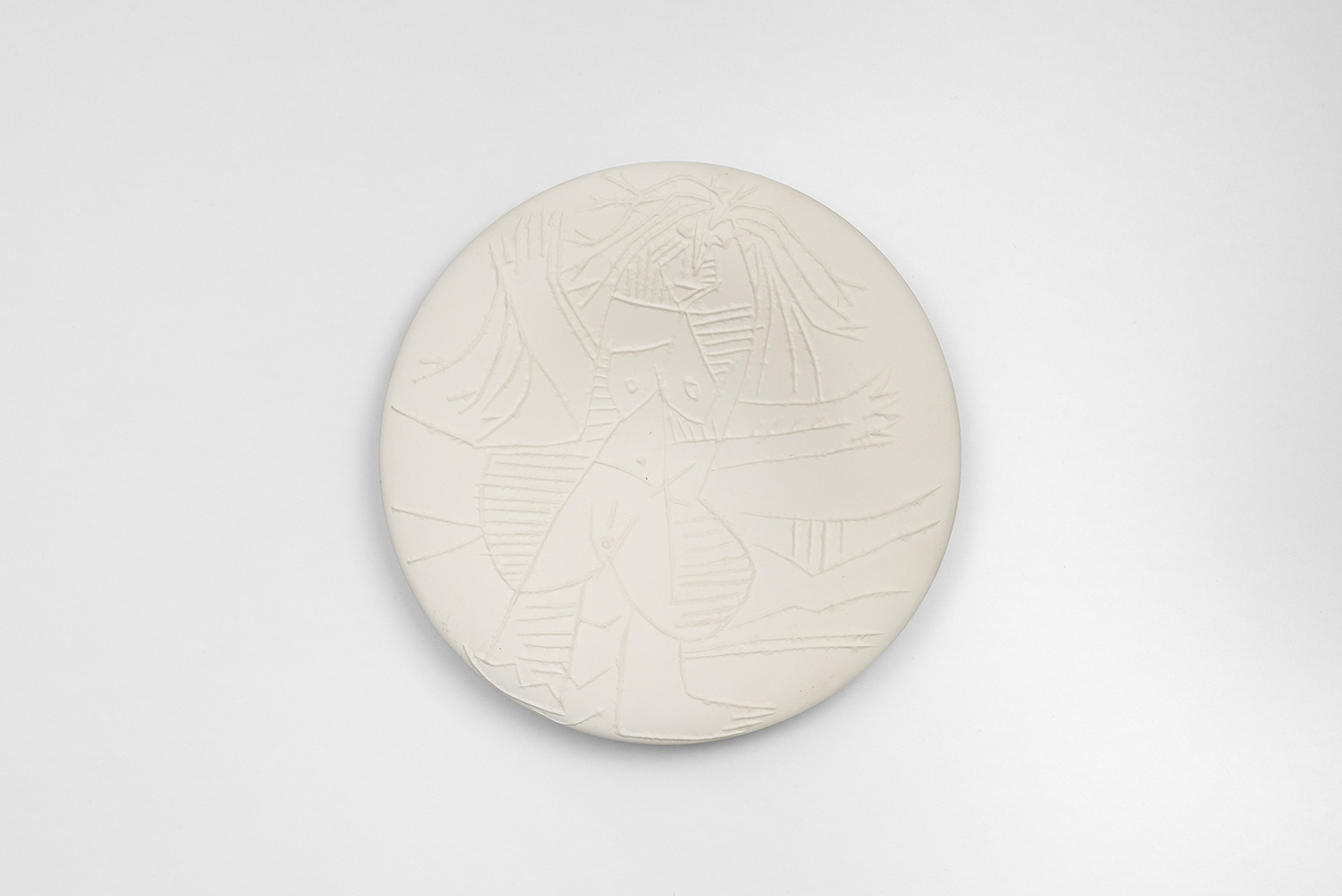 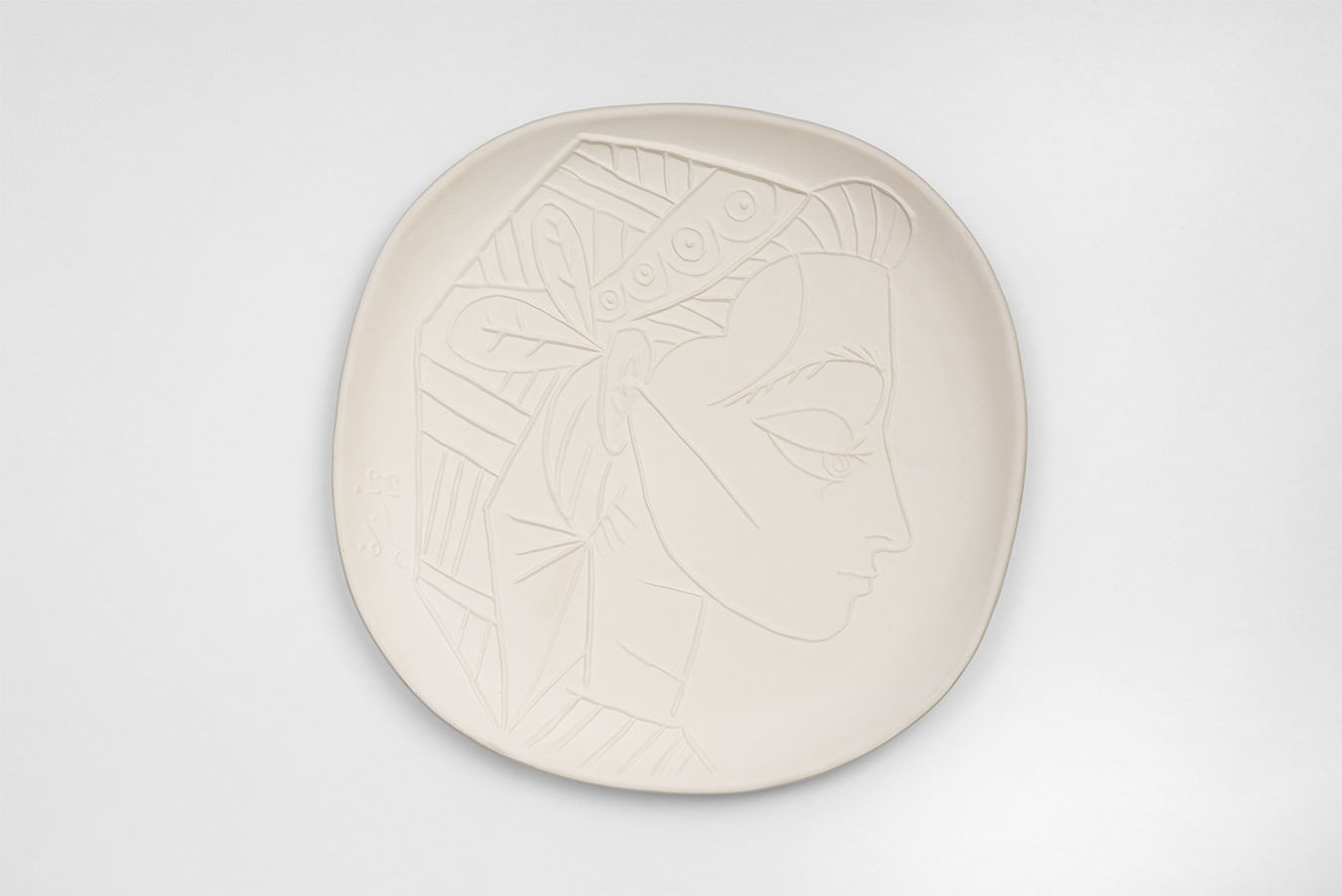 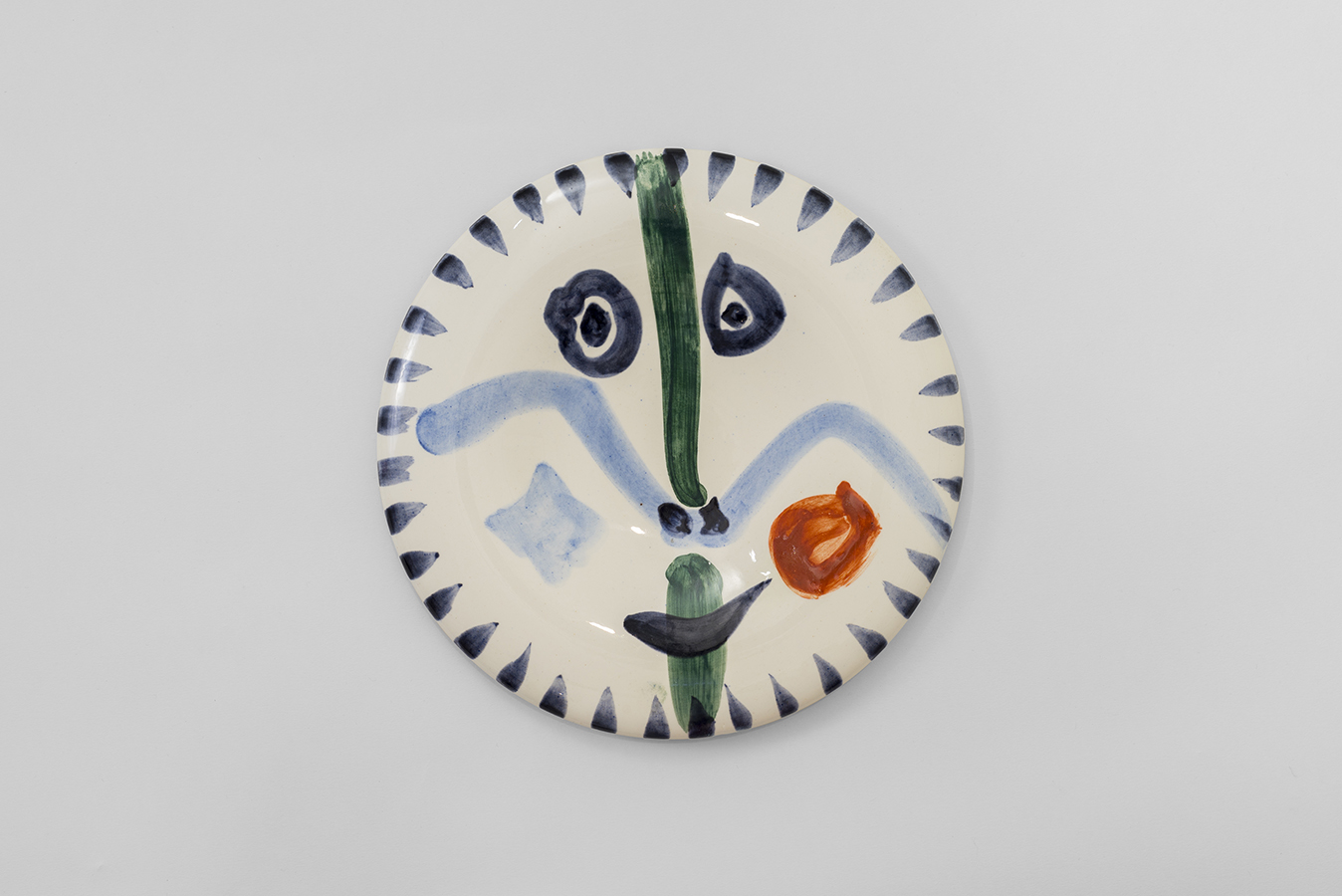 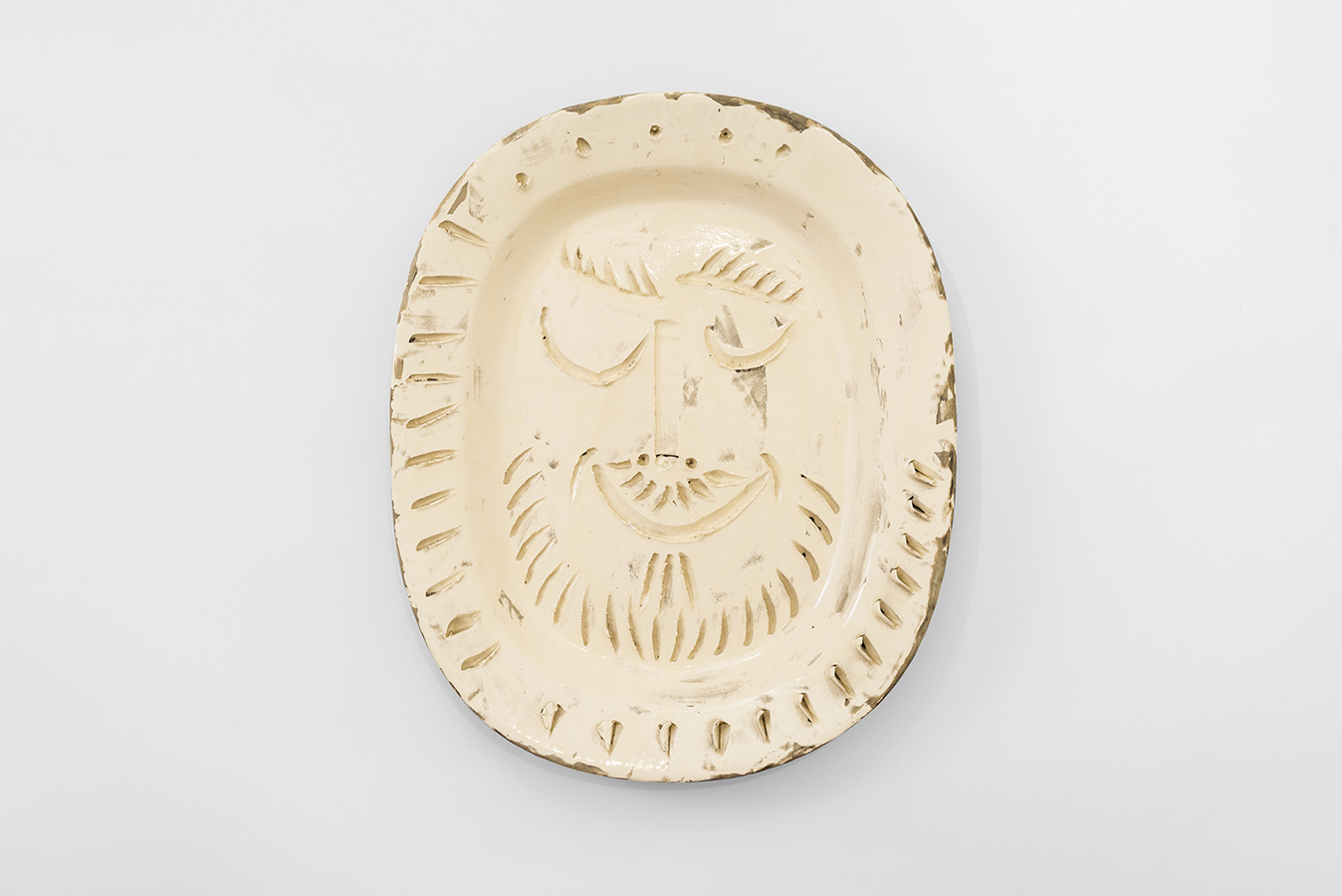 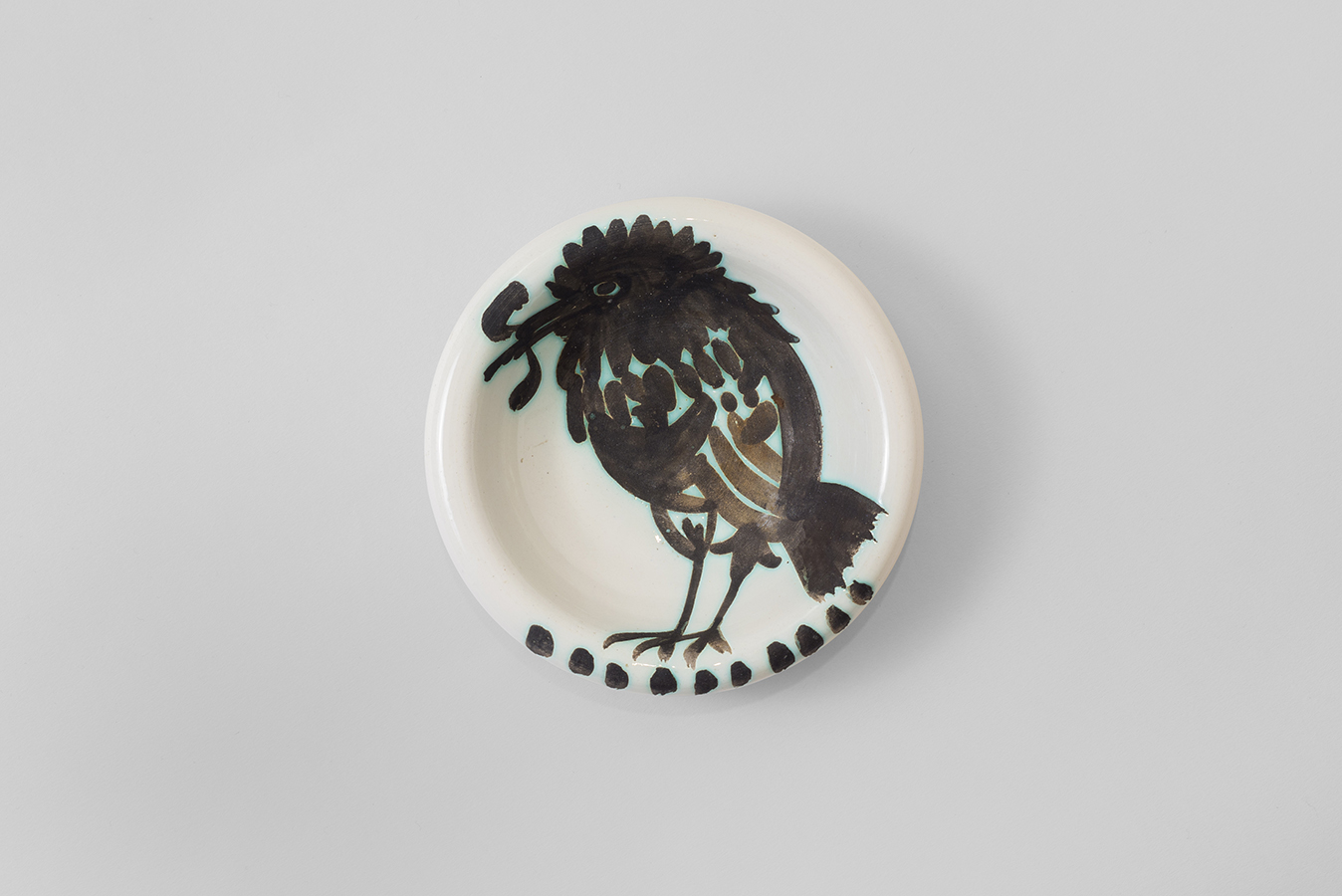 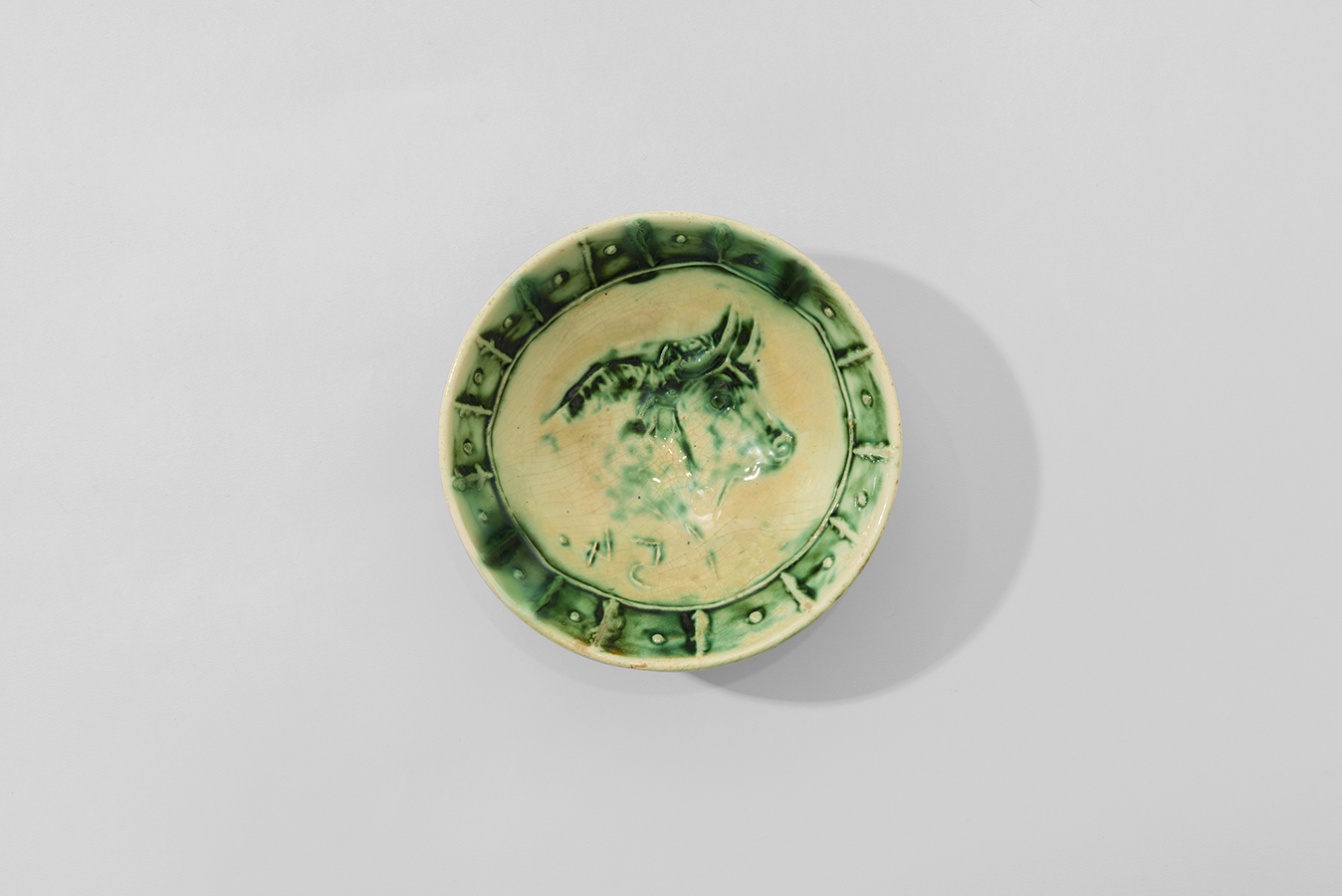 Visiting the coastal town of Vallauris on France’s Côte d’Azur in the summer of 1946 for the annual pottery exhibition, Picasso was struck by the works from the local Madoura pottery. He was introduced to the pottery’s owners, Suzanne and Georges Ramié, who welcomed Picasso into their workshop, allowing him to use their tools and resources for his own experimentation with clay.

Frequently innovating with new styles and techniques throughout his career, Picasso began creating ceramic pieces with intensity. Renting a small studio close to the Madoura pottery, Picasso initially worked with simple, utilitarian objects, such as plates and bowls, later producing more complex forms, such as vases and jugs rendered with facial features or anatomical forms of figures and animals. Experimenting with a number of different methods, the most common was for him to create an original work which the ceramicists at the Madoura workshop would then replicate by hand, following the exact form and decoration of Picasso’s original. These were then produced in editions and sold directly from the Madoura pottery. 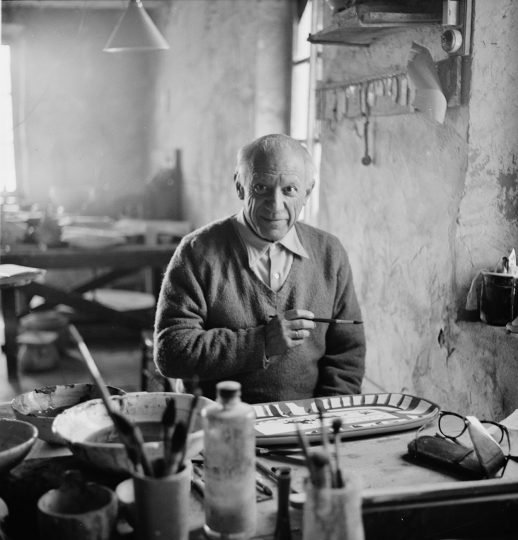 Picasso saw his editioned ceramic works as a means of democratising his artistic practice, and allowing a greater number of people to be able to afford his work. Finding working with clay less demanding than painting, Picasso devoted a significant part of his time to producing his ceramics throughout the 1950s and 1960s. Experimenting with various forms, Picasso used engraving, modelling and glazing amongst other techniques to bring the subjects of his ceramics to life. Picasso used a number of motifs in his works with clay, the iconography of bullfighting – bulls, matadors, banderilleros – which were the subject of his work in other mediums, frequently featured on his jugs, bowls and plates. Horses, fish and birds, particularly owls, also regularly featured in his ceramics.

Faces and mythological figures are other examples of Picasso’s subject matter. Reminiscent of his use of geometric, deconstructed forms in his painting, Picasso would carve and engrave faces onto plates, creating richly textured works. One of his muses who was often the inspiration for his faces and figures was Jacqueline Roque, a ceramicist at the Madoura workshop who became Picasso’s second wife in 1961.

Above all, the artist was fascinated by the functional potential of these items. By the time that he began working with ceramics he had become one of the most celebrated and successful artists of the twentieth century, and his sculptures, paintings and drawings had a significant market. Picasso saw his editioned ceramic works as a means of democratising his artistic practice, and allowing a greater number of people to be able to afford his work. In total, he made over 600 different designs, exploring the medium until just two years before his death in 1973. 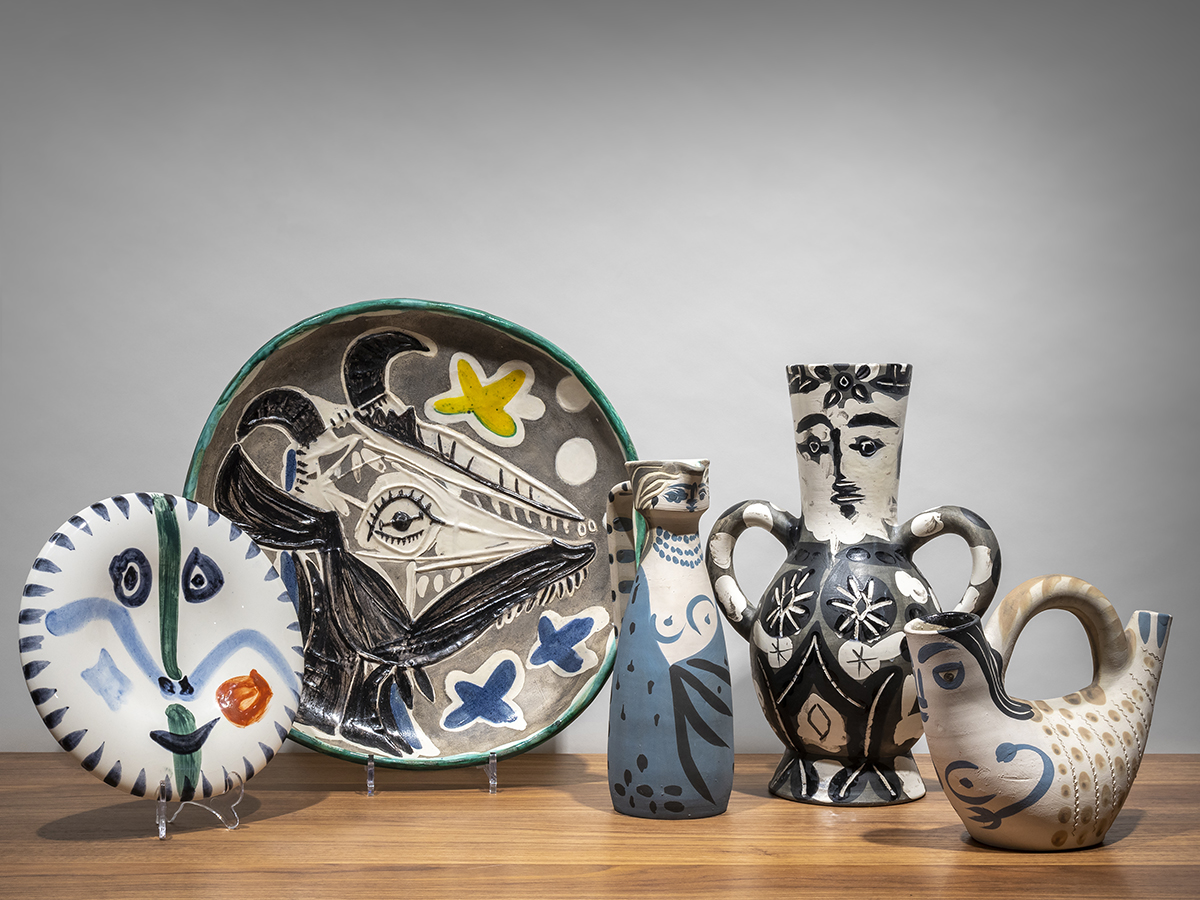 With subjects varying from Greek mythological figures, animals, faces and even scenes of the Spanish corrida, Pablo Picasso’s ceramic works are united by an accessible and playful aesthetic that carries the recognisable hand of the artist. The selection exhibited at Huxley-Parlour, featuring female muses, faces and curious animals in unique designs and unusual shapes, speaks to the variety of the artist’s practice and its enduring appeal over time.

From elegant plates and platters to intricate and imaginative pitchers and vases, the pieces exhibited reveal the breadth of the artist’s innovative practice in clay. Works of note include a delicate white plate depicting the profile of Jacqueline Roque, and a number of his decorated statuettes of owls. Further whimsical and unusual pieces include Figure de Proue, a white ceramic vessel colourfully glazed and shaped to resemble a figurehead found on the bow of a ship, and Pichet à Glace, which takes on human features and is recognisable due to its bulbous spout, short round handle and opening for filling water.

Picasso drew his inspiration from the summer light and Mediterranean colours of the Cote D’Azur in the South of France. These are reflected in the sinuous forms and delicate colours of his wares, largely blue, black and earthy tones. The shapes of the various pieces speak to Picasso’s many sources of inspiration, including his fascination with classical antiquity. Amphoras, or tall vases with two handles, echo the silhouette of ancient Greek vases. Conversely, bourrache, or pitchers with a long neck often used to contain oil, reflect local craftsmanship and are characteristic of the Provençal region of France.

As in Picasso’s prolific painted oeuvre, his use of vigorous, abstracted brushstrokes give life and vibrancy to his ceramic subjects. In some cases, the arms of pitchers are turned into extensions of the figures themselves, becoming the anatomical features of the animals depicted. These works in particular demonstrate the evolution of Picasso’s practice, having begun with mostly utilitarian items such as plates or bowls and having progressed to more complex forms.

Throughout his later career, Picasso experimented with a variety of ceramic techniques, including oxides and glazes, firing processes and engravings. He adopted two main styles: the precise replication of an object and the creation of unique designs using dry clay moulds. Works of the latter kind are distinguished by the mark ‘Empriente Originale de Picasso’. Every piece contains a stamp or marking. The most common, featured on all exhibited pieces, include ‘Madoura Plein Feu’, which verifies the edition’s authenticity and provenance, and ‘Edition Picasso’, limited editions authorised by the artist and created at the Madoura factory.

Picasso prioritised the functionality of his ceramics. Many of his first pieces were used in his own home or gifted to friends. In contrast to the elevated prices of his paintings and sculptures, his ceramics were both accessible and easily available. Reflective of Picasso’s unmistakable style, they provided then, as they do now, a unique key into one of the twentieth century’s most influential artists.

The exhibited ceramics largely date from the early 1950s and measure between 9 and 15 inches in height or length.